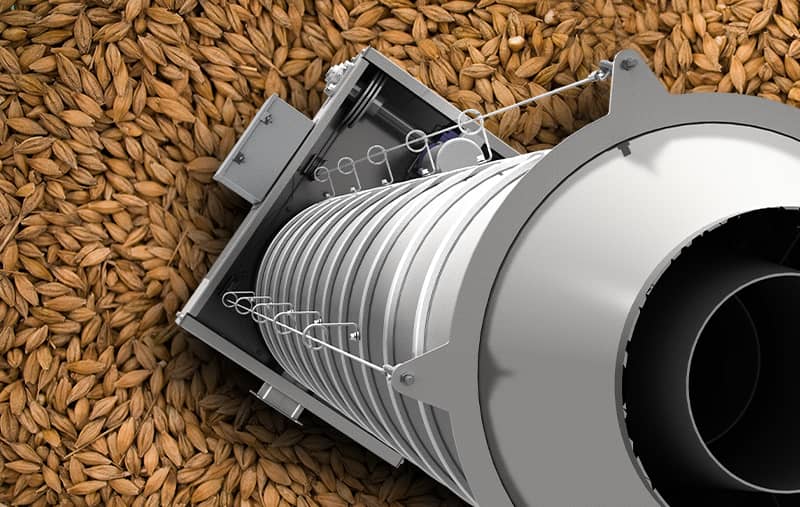 Vortex’s retractable loading spouts are used for loading dry bulk solid materials into vessels such as semi-tankers, open trucks, railcars, barges and ship holds, as well as open stockpiling.  In the grain industry, the transported materials are eventually ingested through food consumption which is a major concern for grain inspectors, elevator & mill operators and ultimately the consumer themselves.

During the 2014 tradeshow season, several attendees voiced some concerns about the design of our spout’s outer dust containment sleeve. They saw a likelihood for contamination to occur from metal fasteners inside the sleeve.

“Basically, they said the design was not food friendly.  I took these comments very seriously,” says Jon Jasinski, Vice President of Sales for Vortex’s Loading Solutions Division.  “I immediately challenged our engineers to develop a design that would combat these concerns.  Our group ultimately came up with some great ideas.”

One of the main concerns from the food industry was the loading spout industry’s standard method of utilizing aluminum and metal rings to support the outer dust containment sleeve; and more importantly how these inner and outer support rings are fastened to each other.   The industry standard is to drill and rivet the rings together, drill and bolt the rings together, or utilize self-tapping screws.  This method results in aluminum and/or metal shavings inside of the sleeve as it is being constructed.  Even though Vortex takes much effort in fully expanding the sleeve and cleaning it with compressed air, shavings can still get into the folds and ultimately fall out later when the spout is in operation.

Additionally, the food industry has a legitimate concern about the fasteners, i.e. rivets, bolts, and screws, which are used in the construction of the outer dust containment sleeve.  These fasteners can ultimately fail and then contaminate the product being transferred through the loading spout.  A flour producer, who spoke with Jasinski, said he lost eighteen rail cars of flour because they were contaminated with metal shavings and fasteners from a different manufacturer’s loading spout.

Support rings are typically fastened together by rivets or screws that can deteriorate and contaminate the material load.

By utilizing an exterior clamping method and newly designed inner and outer support rings, we were able to eliminate the need for mechanical fasteners and the potential for contaminating the load. This sleeve design is now standard on all Vortex loading spout orders regardless if it intended for a food grade application or not.

Vortex has redesigned the support rings to eliminate metal pieces on the interior of the spout.

The other major concern about the spout design came from a flour miller in Tennessee.  He suggested that Vortex take the lead and improve the method by which the way the inner material feed cones are cabled together.  He was involved in two (2) separate situations where the cable fasteners from a different manufacturer’s loading spout failed and contaminated loads of flour.

The industry standard is to fasten u-bolts to an “ear” that is welded to the metal stacking cone.  The nuts that hold the u-bolt in place can become loose over time and fall off.  Or even worse, the u-bolt itself can fail and in both instances, contaminate the product.

The typical u-bolt and nut harness guides contain several pieces that could contaminate a load.

Wanting to improve our loading spout, our engineers redesigned the cable harness for the inner stacking cones. The new design incorporates a custom-machined steel peg which has a precision-drilled hole for the cable to pass through.  The cable is held in place by a set screw that is treated with Locktite®.  This new design feature is available on all food grade loading spouts.

Vortex redesigned the cable harness to reduce the risk of metal contamination.

Vortex will custom engineer your loading spout to meet any application, load rate or travel distance including corrosive or hazardous materials and extreme temperatures.