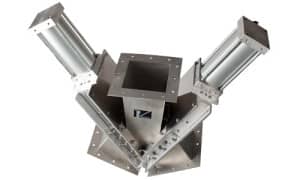 The Vortex Gravity Vee Diverter is sourced to replace a leaking diverter and a slide gate with one, all-encompassing valve in the handling of ground coffee.

Challenge:  Replace a leaking diverter and a slide gate with one, all-encompassing valve.

This facility installed its first Vortex valve in 1990. They were so pleased with the sealing capabilities of the Vortex Roller Gate that over the years, the facility has continued to replace problem valves with Vortex products.

In summer 2000, the company sought to install an additional production line. Due to an acquisition, the facility was under new management who was not familiar with Vortex. On only two weeks notice, Vortex made arrangements to educate new management by visiting the facility with the Vortex Mobile Display Unit (MDU).

At the time, the Vortex MDU was nearing the end of an eight-week tour. A Vortex sales engineer was originally bringing the MDU back to Salina, Kansas, USA, but revised his route and drove 10 hours to this coffee facility. The new management received an extensive presentation on the functionalities and benefits of Vortex products. Then, the sales engineer drove 17 hours back to Salina. Management was impressed by the presentation, which resulted in their specifying of Vortex valves for their new production line. The new production system included large quantities of Vortex Roller Gates and Wye Line Diverters, and three Multi-Port Diverters.

A few summers ago, the facility discussed a problem they were having with a pre-existing, non-Vortex diverter being used in their older production line. The diverter and shut-off slide gate (located above it) were directly below a storage bin, and were responsible for diverting ground coffee toward two different coffee can packaging lines. The diverter often leaked significant quantities of material, which caused frustration for process efficiency and workplace cleanliness. In response, the facility was recommended a Vortex Gravity Vee Diverter with air purge. The two, independent actuators necessary to operate the slide gates on each leg of the Gravity Vee allowed the company to eliminate its separate isolation slide gate, located above the previous diverter. Upon installation and operation, the company enjoyed the Gravity Vee Diverter’s sealing capabilities. With many successful Vortex products now present in this customer's facility, the relationship between the two companies continues to thrive.