Orifice Gate vs. Butterfly Valve vs. Bull Nose Knife Gate: What are the Differences?

Orifice Gate vs. Butterfly Valve vs. Bull Nose Knife Gate: What are the Differences? 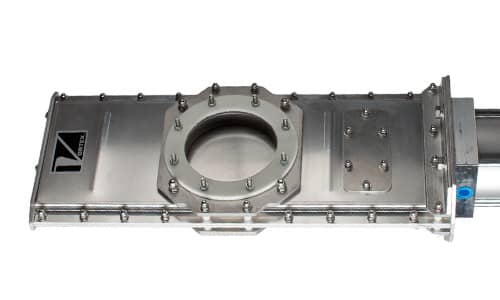 One fundamental difference when comparing the Vortex Orifice Gate to other valves, such as a butterfly valve or a bull nose knife gate, is the Vortex Orifice Gate is specifically designed to handle dry material, while the other valves are not. Butterfly valves and bull nose knife gates are designed for gas and liquid applications. They are effective valves in those environments, but suffer numerous problems when misused in a dry bulk handling application.

The butterfly valve’s design creates a handling problem for dry bulk solids, as the disc is located in the immediate material flow stream, creating significant flow restriction. Many process engineers design their entire conveying system with larger than necessary piping to accommodate these bottlenecks created by butterfly valves.

Soft Seals which are Exposed to the Material Flow Stream

The soft seals in a butterfly valve allow the rotating disc to produce a bubble-tight seal in the closed position. The very nature of dry solids does not allow these types of valves to create a tight seal because dry material cannot be displaced like a gas or liquid. Many issues can arise over time as the seals begin to erode and tear.

The soft seat of the butterfly valve is also susceptible and exposed to the material flow stream. This causes additional wear points and eventual leakage of conveying pressure and/or materials through the valve – even in the closed position. In powder handling applications, material particles tend to migrate through the stem of the butterfly valve, causing the valve to seize.

Because bull nose knife gates are also intended for handling gases and liquids, the soft seals typically used in them are also exposed to the material flow stream – which is problematic when handling dry material. Upon gate closure, the leading edge of the blade tends to compact dry material into the soft seals, causing seal abrasion and preventing the valve from fully closing. In the bonnet area of a bull nose knife gate, a packing gland seal is designed to prevent conveying pressure and materials from escaping into the atmosphere. As dry materials migrate through the packing gland seals on opening and closing strokes, the seals are also exposed to abrasion. Once the packing gland seals are worn, conveying pressure and materials are able to escape into the atmosphere.

Rebuild or replacement can be cumbersome with both valve designs, as they are generally constructed as heavy, metal castings. This adds a significant amount of unnecessary weight to the valve, making it difficult to install. Also, because metal castings are solid objects, they do not allow interior inspection and/or maintenance to be performed while the valve remains in-line. Inability to perform quick maintenance requires plant downtime – and in some cases, it is cheaper to replace the entire valve instead of maintaining seals and parts.

Benefits of the Vortex Orifice Gate

These problems are eliminated in the Vortex Orifice Gate design. It utilizes a sliding blade constructed from rectangular stainless steel plate with a round orifice machined through it. The sliding blade actuates between two compression-loaded hard polymer plates. In the closed position, the compression load on the blade prevents conveying pressure and materials from migrating passed the blade or escaping into the atmosphere. In the open position, the blade’s machined orifice aligns with the conveying line, eliminating flow obstructions and exposed seals – which are vulnerable to wear from the material flow stream in the butterfly valve and bull nose knife gate designs. The Orifice Gate also “self-cleans” material from the seat on each opening stroke of the blade, so there is no material packing or bridging.

The Orifice Gate’s compression-loaded hard polymer seals compensate for wear, unlike the butterfly valve and bull nose knife gate designs. This extends the service life of a valve and requires less maintenance. The compression load on the seals is also adjustable. By loosening the nuts along the lateral aspects of the gate, shim(s) can be removed and the nuts retightened to restore the gate’s dust-tight seal. Because this maintenance procedure can be performed while the valve remains in-line, downtime costs are reduced.

If the valve ever does need to be removed from the conveying line, its construction is lightweight, compared to cast valves.