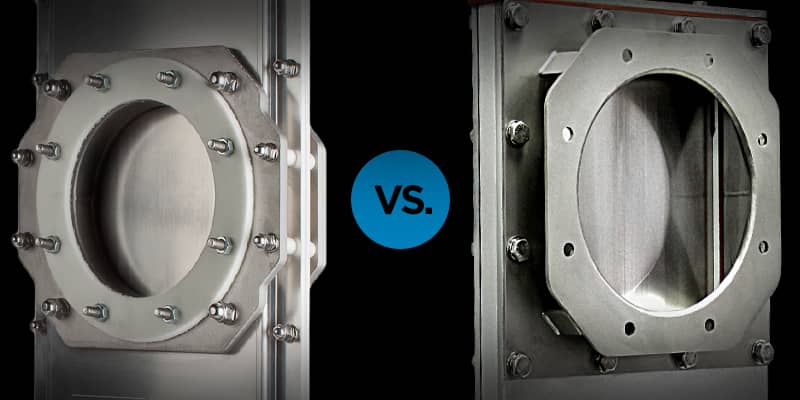 Question: “What is the main difference between the Clear Action Gate and the Orifice Gate valves? I’m not sure which one I need?”

In many applications, the Clear Action Gate and the Orifice Gate can be used interchangeably. Both gates are designed for use in gravity flow or pneumatic conveying systems. Both are used to handle powder, granules and pellets. And both have the same sealing capability and easy serviceability that is synonymous with Vortex’s brand. However, each has some specific advantages and here are the things you need to consider.

Even though the Orifice Gate’s overall height is originally smaller, it’s height increases substantially when transition flanges are added to an Orifice Gate to match the airlock’s opening.

Use above an Airlock: A positive shut off gate above an airlock is often needed for a couple of reasons. First, it may be desirable to start the airlock without material sitting between the vanes of the airlock. This may be the case with material that tends to pack or set up in the airlock. Secondly, is the need to prevent conveying line air or fine materials from being blown up through the airlock to the bin or silo causing cross-contamination. This is even more critical when two or more bins or silos are feeding material through several airlocks into a single, common conveying line. Without a positive shut off gate above an airlock, substantial conveying line pressure may be lost, thus reducing the efficiency of the conveying system.

Use for Concise Metering: Another application to consider using a Clear Action Gate is when the gate is to be used to meter or reduce material flow. This is particularly true when the gate will not be cycled to a “full open” position during every cycle, but instead goes from a “full closed” position to “partially open”, and then back to “full closed” again. If you want to control a gate with a VPC assembly, an AVP assembly or an IVP assembly, a Clear Action Gate would be the valve to choose over the Orifice Gate.

The blade design of the two different valves determines how effective the gate can meter or reduce the material flow. A Clear Action Gate has a machined square-edged blade for situations when metering and weighing material is most critical. The Clear Action Gate self-cleans on its closing stroke at “full closed” allowing it to discharge beneath the valve. When adding a control assembly, a Clear Action Gate can repeatedly open or close at “intermediate” positions to control, shut-off, or meter material flow with pinpoint accuracy. The intermediate positions are easy to manually set or adjust.

The Orifice Gate’s blade has a circle cut out of the blade. When the circle in the blade aligns with the gate’s opening, it is in the “full open” position. The Orifice Gate self-cleans every few cycles on it’s opening stroke and clears material away trapped in the sealing areas. It is possible to add a control assembly to an Orifice Gate so it can partially close or open on the material, but it won’t be a definitive measurement.

Orifice Gates can universally be installed horizontally, vertically, or in any varying degree position without any problems. Clear Action Gates are strongly recommended to use only in the horizontal position as material can rest and collect in the discharge flange if the gate is used in a vertical position.

Generally, the Orifice Gate cost less size for size than the Clear Action Gate. This is due to the popularity of the Quantum Series line, which can be used universally for a number of applications. The clean, simple design of the Orifice Gate, which is used to replace bull nose and knife gates, keeps the demand for production up, which lowers the cost for the consumer. The Clear Action costs more because of the flanges that are attached, but can function better than the Orifice Gate in specific applications.

When choosing which valve is the best choice for you, consider which valve can handle your application, how much room do you have, what position will the valve be in, and finally, cost can be the final determination. If you are still wondering which valve is best, consult your valve manufacturer for the best solution or an engineered alternative.