What's the Difference between a Knife Gate and a Slide Gate?

What's the Difference between a Knife Gate and a Slide Gate? 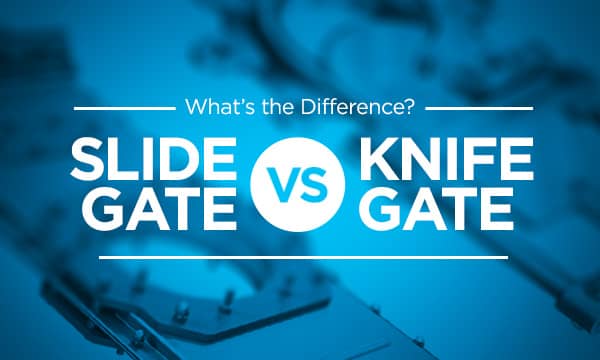 Valve suppliers often receive quote requests for a “knife gate” when what a company is really looking for is a “slide gate” for dry bulk material handling. As often as the two terms are intermingled, a knife gate and a slide gate are NOT the same.  A knife gate valve is a component that utilizes a blade to cut through clogging of heavy liquids; whereas a slide gate valve is a component utilizing a slide plate in order to better manipulate or control the flow of dry bulk material.

Knife Gates are to cut through thick liquids and gases

Knife gate valves were originally designed for use in the pulp and paper industry.  Utilizing a sharp, beveled edge, a knife gate was ideally designed to cut through the stringy pulp encountered in the pulp and paper industries. The benefits of knife gates also include that they are easy to actuate and cheap to produce. As a result, use of knife gate valves quickly expanded into numerous other markets, including wastewater treatment, oil and gas, mining, and power, in a short period of time. Knife gate valves became advantageous in sludge and slurry applications because their blades can cut right through thick liquids easily.

Today, a knife gate valve can be found in many processing plants. They are available in large sizes to better handle thick flows of heavy oils, light grease, slurry, paper pulp, varnish, and wastewater.  However it is important to note that knife gate valves have low-pressure limitations.

Even though knife gates handle liquids and gases well, their utility is greatly diminished when used in dry bulk applications. The knife gate is designed to seat the blade into an elastomer seal after the blade cuts through the material.  Thick liquids easily glide over these soft seals with no interference.  In contrast, when a powder or a solid passes through a knife gate, the dry bulk material packs into the soft seals against the end of the gate.  The seals become abraded and, over time, the blade will not close tightly.  This prevents positive air and material shutoff.  The knife gate starts to leak material dust.

In both situations, you will need to replace the knife gate’s seals once it begins to dust, and depending on the valve and its placement, it may be necessary to remove the entire valve out of the system line to replace the seals. This can be cumbersome as knife gates are generally constructed of heavy metal cast iron. The weight of the valve makes it very difficult to maintain while in place, or to replace.  Further, removal of a knife gate for maintenance purposes will result in downtime, decreased production and negatively impact revenue streams.

Slide Gates are to shut off dry material flow

Unlike common knife gates, a slide gate is a component that fits into a system specifically engineered to handle dry bulk powders, pellets, and granules.  Slide gate valves are linear motion valves in which a flat plate slides into the flow stream to provide a shut-off of material or air. The gate can close or open the slide plate on a moving column of material at all times. The slide plate of the gate is not, in most applications, open or exposed to people.  Thus, when used as designed and instructed, this type of valve is inherently safe to perform what it was designed to do.  A slide plate provides no risk or hazard to the operator inside the system so long as the operator is following proper Lockout/Tagout procedures and has disabled any pneumatic sources.

A slide gate utilizes a stainless steel, rectangular slide plate to shut off or open the flow of dry material. The slide plate actuates between two, compression-loaded, hard polymer plates. In the closed position, the compression load on the blade prevents the dry bulk material and the conveying air from escaping through the valve or into the plant’s atmosphere. Because knife gates do not have hard polymer plates to seal the blade during actuation, a cavity is created where material dust will accumulate. The slide gate valve also “self-cleans” material from the seat on each stroke of the slide plate to prevent bridging or packing of material.

At some point, the hard polymer seals will wear to a degree that even the compressed rubber backing begins to lose its effectiveness. Rather than replacing the polymer seal plates right away, the Orifice Gate valve features a patented shimming system. By simply loosening the bolts and removing shim(s) along each lateral aspect of the gate, the bolts can be re-tightened and the gate’s compression load will be restored. Should the Orifice Gate valve ever need to be removed from the conveying line, its modular construction is lightweight when compared to cast knife gates.

However, a slide gate is not designed to seal liquids. When the slide plate closes, it seats into a polymer seal that has no cavity.  Hence, the liquid will find the path of least resistance and trickle through any opening.  A slide gate is not bubble tight and will leak any liquids that are being conveyed.  In contrast, a knife gate contains an elastomer o-ring seal or urethane o-ring seal packed into the seat, so the liquid is displaced.

When quoting a valve for your facility, consult your valve manufacturer to find out if a knife gate or a slide gate is the best valve for the material that you are handling.  The dialogue that you have with your manufacturer can help you select the correct valve the first time, saving you replacement costs later.