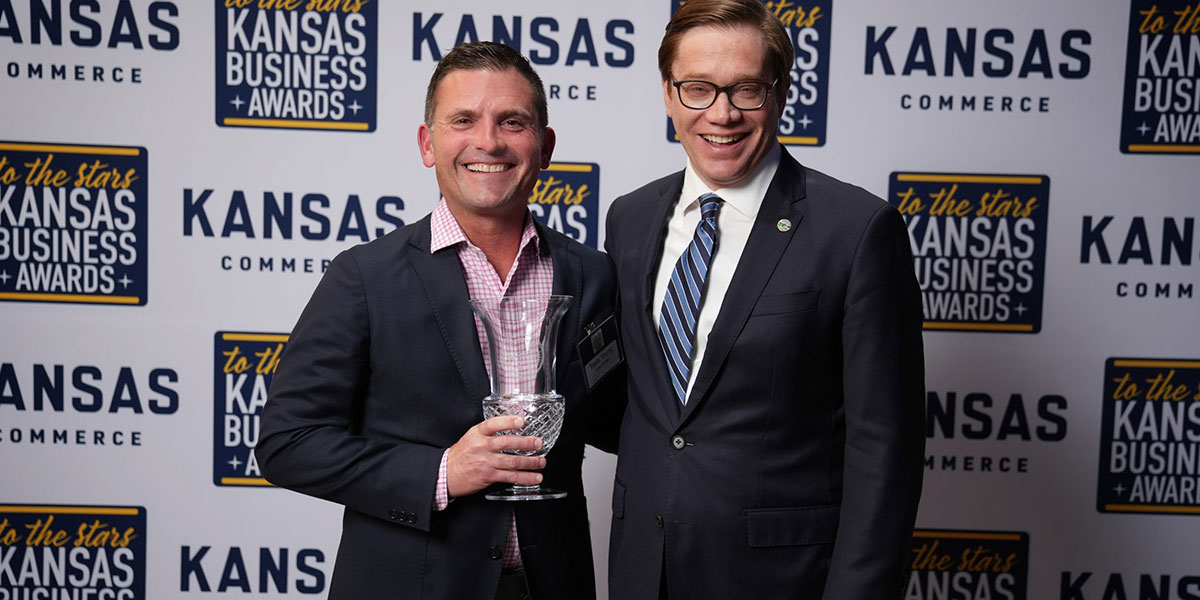 Kansas Governor Laura Kelly announced that Vortex Companies has received the highest honor a business can receive in the State of Kansas, The Governor’s Award of Excellence. The announcement was made Thursday, October 20, at the To the Stars Banquet in Topeka, which honored 237 businesses, including 181 Merit Award winners, 56 regional award winners, and nine state-wide award winners.

"Vortex Companies exemplify what Kansas has become – a state where innovation thrives and businesses can grow and succeed,” Governor Laura Kelly said. “All of the To the Stars award-winners deserve credit for their significant contributions to Kansas’ record-breaking economy.”

Nominees were reviewed and scored for various criteria such as business expansion, employee recruitment and retention practices, training and educational programs, capital investments, and support of local community events.

The 2022 Governor’s Award of Excellence winner, Vortex Companies, was founded in 1977 in Salina, Kansas. Vortex specializes in the design and manufacture of components for the transport and flow control of dry bulk solids. With a global service network that spans more than 120 countries, Vortex delivers global solutions through localized relationships to more than 20,000 companies.

“On behalf of our entire team and Vortex Companies, it is an incredible honor to receive this award. There are many great companies in this State, and it is humbling to be considered one of the best. The dry bulk material processing industry is strong in Kansas, not only from an industry point-of-view, but from an educational one as well. Vortex is proud to be a representative of that economic aspect of our State,”Vortex President and CEO Travis Young said.

Dry bulk solids handling was first introduced as a concept in the 1940s, primarily focused on flour. The city of Salina has a rich history in the industry dating back to the 1950s when the Heath Holsom Bakery began testing pneumatic conveying of flour. In 1961, Neil Peterson, founder of Vortex Global, began developing formulas for conveying materials other than flour. Peterson developed a process to test conveying products with just a quart size sample. In 1977, Peterson and Lee Young, chairman of the board, founded Salina Vortex Corporation. Over the next four decades, Vortex would grow to become a global company handling dry bulk solid materials across a variety of industries.

This is the third Governor award that Vortex has received. Travis Young also received the Welcome Back Award this year. The Welcome Back Award recognizes entrepreneurs who left Kansas but have returned to make their mark in the Sunflower State. Young moved to the United Kingdom in 2008 to establish a European office for Vortex. After successfully launching the office and hiring key employees, Young and his family returned to Kansas in 2017.

Vortex has also won the Governor’s Exporter of the Year Award in 2008. The Governor’s Exporter of the Year award is presented annually to a single Kansas company that has demonstrated excellence in export sales and international marketing. The award recognized Vortex as a company committed to expanding sales in international markets and showcased it as a role model to other Kansas companies seeking similar success.