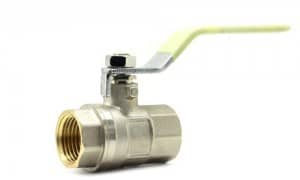 Always Use a Vented Ball Valve With Air Cylinder Operations

Bulk material slide gates and diverters typically rely on compressed air as a power source to open and close the blade of a slide gate or diverter valve. Many air compressors are easily capable of providing air pressure to the air cylinder of 200 psi or greater, even though most dry bulk handling plants operate with compressed air in the 100-125 psi range. Slide gates and diverter valves used in dry bulk handling usually require even less air pressure in the 80-100 psi range, but are capable of handling pressure up to 150 psi. The greater the air pressure to the cylinders, the greater the power and speed of the blade. Thus you can understand how slide gates and diverter valves can deploy significant force when actuating and can cause serious injury or death if not used properly and safely.

To avoid such catastrophes, you should always use a vented ball valve, or residual pressure vent, with any air cylinder operated equipment. This can be accomplished in four simple steps:

The first step of removing electric power is to properly de-energize the gate. Move the single cylinder slide gate to the desired position and identify the air cylinder’s two ports. The back port drives the piston to the front for the closing stroke of the blade to close the gate. The front port retracts the piston to the back which opens the gate. If you have a dual cylinder valve, the ports work in the opposite direction, i.e., the back port will open the gate, and the front port closes the gate. You can now shut off the power to the gate.

It is critically important to understand that removing electrical power to the air control assembly does not reduce a compressed air operated valve to a Zero Mechanical State (ZMS). Removing the compressed air inside the air cylinder of a slide gate or diverter valve is the only method to reduce the valve to a ZMS.

Where should I install a vented ball valve?

How many vented ball valves should I have in my system?

What are the most common accidents?

Most of the industrial accidents occur when you have a weighing
or measuring device downstream in the conveying line. Employees de-energize a component upstream from the gate, such as a hopper, and wrongfully believe that the entire system is shut down. They then try to clear an obstruction or change materials with their arm or hand in the path of a slide gate’s blade.

It must be clearly understood that de-energizing one component does not de-energize all components. If compressed air remains available to the gate during the cleaning process, and an action causes the scale to reach a set point (e.g. leaning or standing on the weigh hopper), the slide gate’s blade will close on anything in its path.

Many times, injury occurs when a vented ball valve was attached to the system, but not used because the lock was permanently removed. Do not operate or service slide gates or diverter valves unless specific lock-out /tag-out procedures for this equipment are in place and enforced. U.S. federal regulations require the user of the equipment to establish a written policy for training personnel and properly performing lock-out/tag-out procedures to reduce the gate or diverter to a ZMS when installing, operating, or maintaining any powered gate or diverter. Lock-out/tag-out procedures are not required by European legislature, but within the industry it is strongly encouraged to have a written directive for safety.

To avoid this in your plant, proper lock-out/tag-out procedures should be developed and followed to assure an extra safety precaution. A universal lock-out sticker logo should be located near the inlet and outlet of a valve. The vented ball valve should also include a device for a lock to be placed on its handle, preventing inadvertent return of the ball valve to an active position. In addition, the end user must train all users of the equipment in its safe operation and ensure they have read and understand the written policy.

Ask your valve manufacturer if they include vented ball valves as part of their safety standards. It’s your employee’s health and your company’s liability that you are protecting.