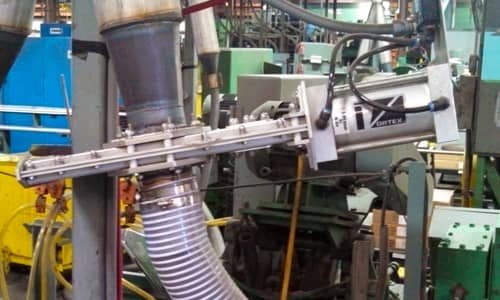 Challenge:  Source a lightweight valve that will maintain a positive seal under full vacuum (15" Hg).

When the plant manager for a Midwest pipe manufacturer was instructed to clean up the air from within the facility, he knew the first areas that needed to be addressed were the seven individual stations where the manufactured pipe was cut to length. The fine metal dust created by the cut-off saws became suspended in the air and migrated into every corner of the plant.

He met with a local manufacturer's representative who carried a line of industrial vacuums. A single vacuum, placed outside the building and insulated for noise, could be sized to collect the dust from all the stations simultaneously. However, it would operate much more efficiently if each individual station could be isolated until the time it was necessary to “pull” material from it.

The industrial vacuum salesperson, who also represented Vortex, suggested that a Vortex Orifice Gate could be installed on each station to isolate them. The slide gates were capable of sealing the differential pressure involved and could be equipped with a solenoid valve to open and close the gate in conjunction with the use of the cut-off saw. When the cut-off saw was not being used, the valve was closed and the demand on the industrial vacuum was greatly relieved.

At the representative's suggestion, hoods were fabricated to collect the fine metal dust around the cut-off area, the industrial vacuum and hoses were placed, and the Vortex valves were installed. The result of the project was a significant improvement in the plant environment. The equipment has performed flawlessly since 2011.