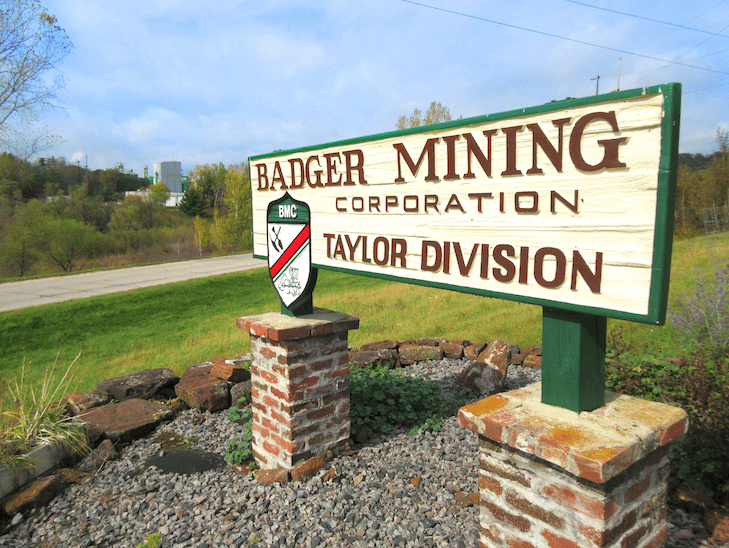 Badger Mining Corp., Berlin, Wis., has been family-owned since its origin in 1949 as a small industrial sand operation near Fairwater, Wis., Currently Badger employs about 325 associates and owns three industrial sand-processing facilities in Fairwater, Taylor and Alma Center, Wis. Additionally, they own three sand-coating facilities and operate transload facilities throughout North America.

Badger fosters a corporate culture that includes corporate values of safety and environmental stewardship. As such, they have received numerous recognitions as both an exemplary employer and for safe, environmentally responsible mining practices.

Badger is a progressive company where associates are able to continually seek out ways to improve company operations. When Rodney Moon, process engineer at the Taylor Division, learned that Salina Vortex was now manufacturing a retractable, dustless loading spout, he required additional information.

Moon was aware of the problems their current spouts were creating. Cables wore too quickly. Cables did not spool into the pulleys properly, which caused them to catch and backlash. With the three-cable system, if there was a problem with one of the pulleys, the spout would not operate properly.

One of Badger Mining’s core values is environmental stewardship, where regulations are not only met but exceeded. Because BMC’s goal is to contain as much sand and dust as possible when loading trucks or railcars, they utilize spouts such as the ones Vortex manufacturers. By lowering the spout into the opening of rail cars or within inches of the truck bed, and pulling a vacuum within the spout housing, nearly none of the sand or dust is exposed to the open air and wind during transfer. It is imperative that the spouts operate correctly.

“Our first approach was to ascertain if Vortex might be able to retrofit the spouts we were using to include their unique features. Jon Jaskinski, vice president of the Vortex Loading Solutions Division, made a trip to our Taylor sand plant to personally meet with us. He pointed out the difficulties in retrofitting competitors equipment. He asked that we install the Vortex spout and let it prove to us the benefits of ownership.” – Rodney Moon, Process Engineer, Badger Mining Corp. – Taylor Division

“It didn’t take long for us to realize that Vortex had a superior spout. Cable issues were a constant source of irritation with the old spouts. The Vortex spout has virtually eliminated our spout downtime. Additionally, the combination of the four-cable system and CNC machined pulleys assured smoother operation and seating of the spouts, which address corporate environmental concerns.” – Todd Olson, Maintenance Manager, Badger Mining Corp. – Taylor Division

“After the initial spout proved itself, we immediately replaced the other loading spouts at our rail load out station and set up to stock and purchase Vortex spouts going forward. We are completing construction on a second rail load out station that will allow us to react quicker in providing Badger Sand to markets that rely heavily on us as a supplier. Because of the positive feedback our rail car loading operators provided, Vortex spouts were included in this project.” – Todd Olson, Maintenance Manager, Badger Mining Corp. – Taylor Division

“Nature provided Badger with the highest purity sandstone in North America. Our manufacturing and process-management systems allow us to offer the best finished product available in today’s market. Sourcing products like the Vortex spout – that make us more efficient as a business – are always greatly appreciated. They allow us to remain the viable, competitive, state-of-the-art supplier that our customers demand.” – Rodney Moon, Process Engineer, Badger Mining Corp. – Taylor Division