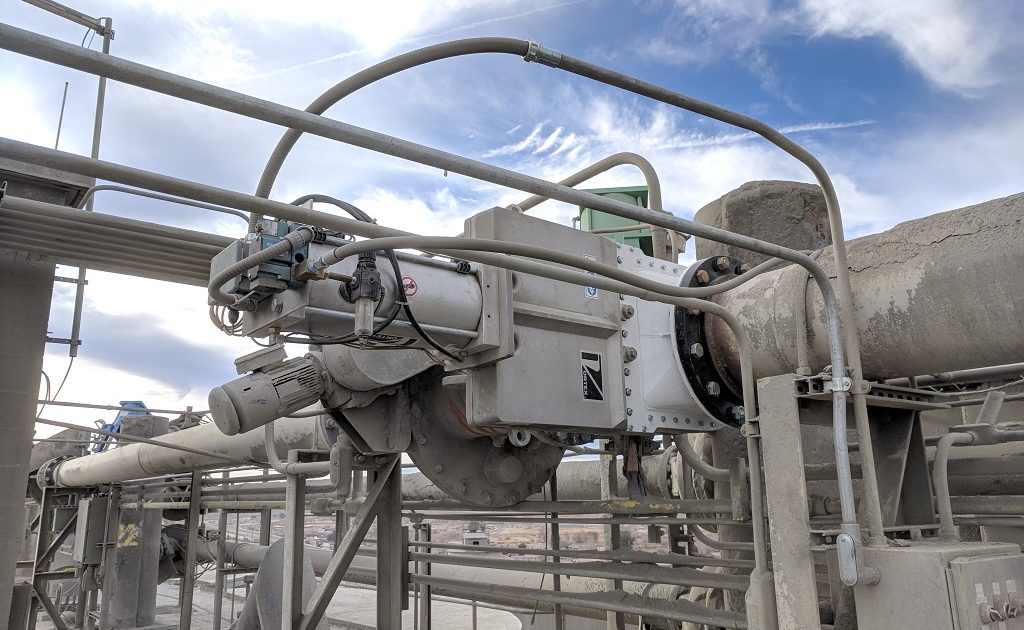 In this client’s application, the Vortex HDPV2 is installed alongside a second pre-existing slide gate. The two gates operate in tandem to be used as a diverter.

Initally, Vortex considered a different valve, the Titan Pressure Valve™ (TPV), for this application because of its resistance to higher pressures and because it is well suited for handling abrasive materials. The TPV also has a narrower profile, which would have brought ease to installation and orientation of the valve. However, because the TPV is not yet available in a 14 in. (356 mm) size, other options had to be considered.

The Vortex new product development team is currently working on designs for 12 in. (305 mm), 14 in. (356 mm) and 16 in. (406 mm) TPV sizes. However, because these sizes have not yet been tested for engineering and performance, they are not currently available to the market.

Instead, Vortex considered the Heavy Duty Pressure Valve (HDPV2) as the next-best option

Though cement powder can be abrasive, the HDPV2 has proven capable of handling this material. Therefore, material characteristics were not a concern.

In this application, a greater concern was convey line pressure. Although the 14 in. (356 mm) HDPV2 valve is capable of sealing against convey line pressures up to 45 psig (3.10 barg), there was initial concern that if both gates were closed at once, undue stress may be put on the HDPV2 and could test the gate’s sealing capabilities. The client assured at least one gate would be open at all times; therefore, pressure was no longer a concern and the HDPV2 was selected for the application.

The client has since installed this HDPV2 and is currently testing its performance in a “proofing stage.” If the client is satisfied with the HDPV2’s performance, they intend to replace the existing gate with a second Vortex HDPV2 valve.