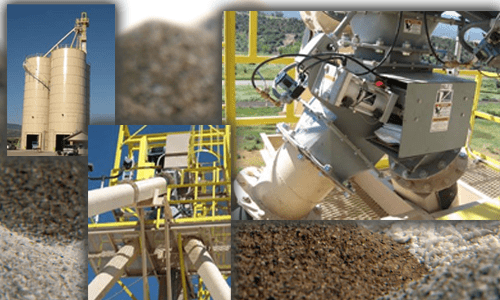 Application: Divert industrial sand from a bucket elevator into three storage tanks. The system is being used as part of a railcar unloading/truck loading station.

Challenge:  Source a diverter valve capable of withstanding the wear and abrasion associated with handling large volumes of abrasive materials.

Industrial sand is a washed and graded, high silica content quartz sand that is used with high-pressure fluids. The fluids are pumped into oil and gas wells to enlarge or scour out openings to create new fractures from which oil and gas can be recovered. An average fracture treatment for a single well uses 26,000 lb | 11,795 kg of industrial sand.

This terminal facility handles large volumes of industrial sand. Under their previous system, trucks were loaded via a belt conveyer – directly from the railcar. Loading was slow, inefficient and expensive.

After thorough review of the application, Vortex engineers identified Aggregate Diverters with modifications for added abrasion resistance as the best solution.

Installed in summer 2008, the Vortex Aggregate Diverters handle approximately 1,000 tons | 910 tonnes per day. With the new system, industrial sand is unloaded from railcars into storage bins at a rate of 200 tons | 180 tonnes per hour. Trucks are then pneumatically loaded at a rate of 25 tons | 20 tonnes in 2 ½ minutes. At this rate, trucks can be loaded two at a time, if necessary.

The terminal facility is open 12-14 hours a day, 6 days a week. The company estimates the new system will save them $500,000 annually. A cost savings of $20,000/month was immediately realized over previous railcar demurrage costs. By accelerating the truck loading process, drivers are able to turn an increasing number of loads each day. Because the terminal facility and the truck drivers are both paid by the load, loading a greater number of trucks creates potential sales/profit opportunities for both parties.

This terminal facility continues to use two Vortex Aggregate Diverters in their original application. During the first four years of operation, an estimated 520,000 tons | 471,735 tonnes of industrial sand has been handled. The ductwork used to direct material flow from the diverters into the storage tanks has required periodic repair and has been replaced twice due to abrasion. No maintenance has been performed to either of the Vortex Aggregate Diverters.