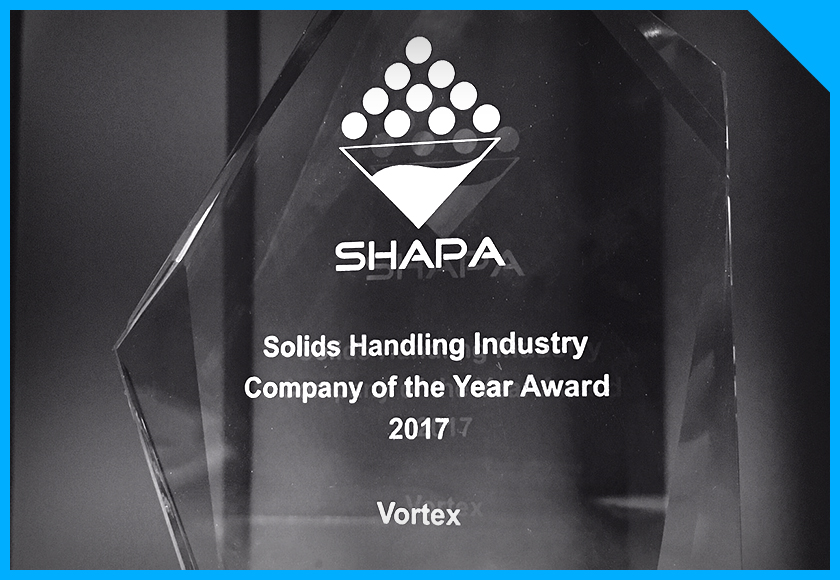 Vortex, a solids and bulk handling components company, has been recognized by Solids Handling & Processing Association (SHAPA) as the 2017 Solids Handling Industry Company of the Year.

Entry to these awards was open to all UK-registered, SHAPA member and non-member companies and institutions operating in the solids handling and processing industry. In order to be considered for each award, companies must have demonstrated achievement, improved sales success, and/or deployment of industry best practices.

Vortex's Company of the Year recognition is largely due to the company's rapid growth in size and sales. Although Vortex has experienced six consecutive years of export market growth, most notably, the company realized record growth of 44 percent in 2016. Such growth was facilitated by the company's expanding sales portfolio, which now includes more than 50 countries worldwide. In addition, Vortex Loading Solutions are the fastest-growing portion of the portfolio, with Vortex loading equipment now installed on six of the seven continents.

"Vortex is grateful and honored to have received this accolade from SHAPA," said Travis Young, executive vice president of marketing & global strategy at Vortex. "The award serves as a nice reminder to be thankful for all the hard work, dedication and effort our employee group puts into making this company successful."

Since its formation in 1981, SHAPA has been the United Kingdom's leading specialist association for the solids handling and processing industry. For more information, please visit www.shapa.co.uk.

Vortex Shortlisted for Company of the Year Award

When Vortex first entered the European, Middle Eastern and African (EMEA) markets in 2006, the company had only a handful of sales prospects and no prior sales history. With no real brand recognition, the company also struggled to establish high quality distribution channels. Despite this, Vortex assisted its clients by solving their processing problems through excellent service and response, allowing the company to find its niche in new markets.