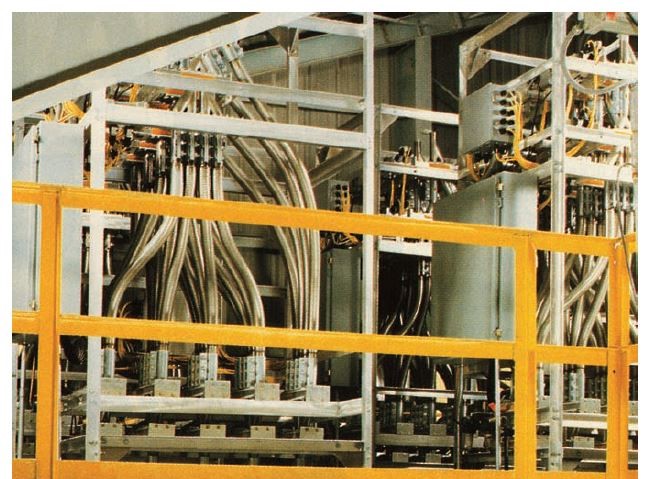 As published in Powder and Bulk Engineering Magazine, 1998.

By working with a valve manufacturer, a Texas chemical company automated their pneumatic conveying system so the operator can direct powder to several destinations — simply by sitting at a computer.

Laurel Industries, a division of Occidental Chemical Corporation, produces antimony oxide at their plant in La Porte, Texas, USA. The fine powder is primarily used as a fire retardant in plastics and as a catalyst in the polyester industry.

A belt conveyor carries the antimony ingots to a furnace. A pneumatic conveying line transports the crude antimony oxide from an unloading station to a feed tank, where it is gravity fed into a separate furnace. No other raw materials are added to either furnace to produce antimony oxide.

“In the ingot furnace, a metal-oxygen reaction takes place,” said Michael Sergi, project engineer at Laurel Industries. “In the case of crude antimony oxide powder, it is a refining step. Basically, an oxidation reaction happens in both furnaces to form the final product.”

The antimony oxide’s physical properties can be altered by controlling furnace conditions as the powder reacts.

After the reacted antimony oxide leaves each furnace, it is immediately cooled to powder form. The powder is dispersed in an airstream to one of five baghouses.

“We actually have a big draft fan that pulls [the antimony oxide] from the furnace through basically just ductwork,” Sergi said. “It is essentially pneumatic conveying, but we are using 30 in | 760 mm ducts.”

From each baghouse, the powder is routed via pneumatic conveying lines to one of 19 possible destinations. The powder can travel to any of four hoppers, each of which has four subcompartments. The other three destinations are set aside for off-spec material.

By using hoppers with subcompartments, antimony oxide with different characteristics can be blended according to customers’ needs. Some hoppers are also connected to additional processing equipment. Depending on a customer’s further processing needs, antimony oxide is directed to the designated hopper.

Sergi explained, “[Which hopper receives the powder] depends on whether we are making the antimony oxide for a fire retardant or a catalyst; or it may just be a different company wants further treatment done to their powder. But the main reason [to direct powder flow] is that whichever hopper or storage area is open, that is what we will fill up.”

In the past, antimony oxide was routed from a baghouse to the appropriate hopper by manually changing the pneumatic conveying line’s configuration.

“Someone would take a flexible hose and make the connection between the line and the intended hopper,” Sergi said. “So basically, it was just a manual [line switching] process.”

The primary disadvantage is manual line switching processes are time-consuming and prone to error. As operators continually disconnected and reconnected lines, the process began to show its flaws and inefficiencies.

“It was also a source of leakage,” Sergi explained. “Either the flexible hosing itself would leak or the couplings would blow apart.”

While making the connections took time, cleaning up from hose leaks took even longer.

“It was not necessarily dangerous; it would just require cleanup,” Sergi said. “Someone would have to go in there, vacuum off the equipment and sweep up.”

In addition to downtime, errors in the manual switching process caused cross-contamination or sent powder to the wrong processing line.

In late 1996, Laurel Industries had a plan for automating plant operations using a multiple-port diverting solution. Antimony oxide would be diverted from any of the five baghouses to any of the hopper subcompartments. With this idea in mind, the company researched, selected and installed a Vortex Four-Way Wye Line Diverter, which allows them to divert powder from one pneumatic conveying line into four other lines.

“We are pleased with the diverter valve’s performance; it operates without problems,” Sergi said. “The valve’s success led us to search for ways to automate our entire operation.”

Their search led them back to Vortex, who they chose to automate the plant’s entire pneumatic conveying system with Vortex Multi-Port Diverters.

“We did some literary searches, but nobody else was making anything close to what Vortex was making, in our opinion,” Sergi explained. “Since we already had the idea for the diverting operation, we basically sat down with Vortex and said, ‘This is what we want to do.’ We gave them an idea of how we wanted it put together. They used that idea and refined it into a custom unit for us.”

“We knew there was a heavy input and output load in the system,” Sergi said. “We happened to see the control package at a trade show. We went to Vortex and said, ‘You know, we would really like to have this in our system.’ So they worked with the control package manufacturer to incorporate it into each of our valve assemblies.”

Without the unique computer control package, automating the pneumatic conveying lines would have been a large undertaking.

“There are all kinds of position sensors on the valves to help us check where they are,” Sergi said. “Then there is all the equipment that actually moves the valve’s position. So there is a huge amount of instrumentation that goes along with that, which requires a lot of wiring. Without the control package, each instrument would have been wired separately. We estimated that three or four miles of wiring would have been required at the plant, whereas the control package connects the pneumatic conveying system components through only two wires.“

The communication protocol allows modules to “talk” over the system to monitor what is going on, as well as send commands, such as an operator’s instructions to open and shut selected valves.

“By networking the system, it essentially allows us to control the whole pneumatic conveying system,” Sergi said. “All we had to do was provide air, a single power source, and the two wire connections to our computer hardware. Vortex did all of the wiring.”

Each unit is made up of:

The Multi-Port Diverters and the computer automation have made diverting antimony oxide a simple matter of pushing a key or clicking a mouse. Plant operators can now view a flow diagram of the entire pneumatic conveying system on a computer screen, to show which conveying lines are open and where antimony oxide is flowing. A simple keystroke can divert the powder flow, with four lines operating simultaneously.

“The greatest improvements with such an operation are the labor and downtime reductions,” Sergi said. “No one has to take the time to manually switch the lines. Now, diverting flow requires no labor; it takes a matter of seconds.”

The time and mess associated with powder leakage from disconnecting hoses have also been eliminated.

“Powder no longer releases into the plant,” Sergi said. “All of the flexible hoses are gone; all of the connections are permanent now.”

Laurel Industries is satisfied, as the Vortex Multi-Port Diverters have been working very well for them.

On March 17, 2004, Great Lakes Chemical Corporation announced its joint venture with Laurel Industries, Inc., a part of the chemicals operations (OxyChem) of Occidental Petroleum Corporation, to combine their antimony businesses. The joint company now operates under the name GLCC Laurel, LLC. The companies cited pressure from Chinese imports as the reason for the joint venture, in an effort to remain competitive in the market for years to come. As a result, manufacturing was consolidated into an existing Great Lake antimony production facility, located in Reynosa, Mexico. The Laurel Industries manufacturing facility in LaPorte, Texas, USA was closed on October 22, 2004.

At the time operations were ceased, the Vortex Multi-Port Diverters continued to operate problem-free.